Woke up this morning and had breakfast on the porch. Sun was shining and plenty of people out walking their adorable dogs – this city is definitely very dog friendly. Practically every person who walked past me outside waved and offered a cheerful hello, that’s something I’m not entirely accustom to. Sarah surprised me and told me she knew someone at the Rogue brewery, we would be getting a private tour. They make some of my favorite craft beers including the Dead Guy Ale and that curious Bacon Maple Voodo Donut beer I mentioned before. Needless to say, I hit the jackpot here. 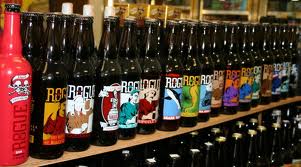 Mitchell, her friend from the brewery, was wonderfully nice. He made sure we had a beverage in hand before we started the tour, I was certainly quick to oblige him. There were a few brews there I hadn’t seen in store and I opted for one of those – ended up with a dark IPA. Delicious!

The facility really isn’t that large for a national distributor. It’s amazing to know that these relatively small operations translate to big business. I’ve had a bottle of Rogue as far away as NYC with no problem, seems to be if your beer is tasty enough, the world will find you.

We had a lot of the brewing process explained to us in detail by Mitchell. As an occasional home brewer myself, it’s insane to see these giant vats containing delicious ales in contrast to my series of fermenting buckets I store in the garage. Even the large quantities of beer I produce wouldn’t begin to scratch the surface of Rogue Brewery.

Another interesting thing of note, a lot of the smaller microbrews collaborate consistently with one another. It’s a community of beer lovers, not your typical market. The Rogue brewers were actually working on a batch of beer in collaboration with Stone Brewery out of San Diego – not sure what the name is, but I’d love to try it when it’s available!

Before we left, Mitchell gave me a glass of the Voodoo Maple. Woah, flavor explosion. I can’t imagine drinking much more of a glass to myself, it’s very rich but it’s very good! The same smokiness I noted in the actual donuts just a few days before is perfectly replicated here.

Thanks again to Mitchell for the tour! I’m already making myself thirsty for another Dead Guy!